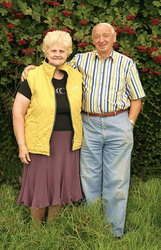 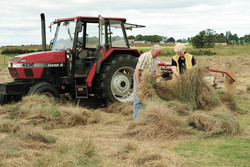 We, Jim and Cynthia, were married in 1957 and in the August of that year we came to live at the Limes, Sandhutton, and had over ten happy years there. Our daughter Joanna was born there in April 1965. About that time 1965/66 a friend of long-standing came to tell us what had happened in his life.  I was raised in the Methodist Church and so was he and Cynthia and myself were very involved in that movement. George told us how he had been healed of a serious back problem and that he had received The Holy Spirit – and had been given a new language, which The Bible calls “speaking with other tongues”. I was thrilled for him but nevertheless said to myself “it’s great for you, but I am OK. I received The Holy Spirit when I was born again 18 years ago, but he persevered and thankfully we were both filled with The Holy Spirit and rejoiced with him shortly afterwards. He then came over to lead our midweek meetings on Friday evenings and opened up the scriptures to us, both at Sandhutton and when we moved to Hollybush for about two years.

Those were great days when we saw many people saved, healed and filled with The Holy Spirit. This was before the Charismatic Movement began to take off, so we were classified as ‘weird’, gone over the top, taking our religion too seriously. It was as we studied the scriptures that we realised the gifts of the Holy Spirit are for today and therefore when Cynthia and I were passing Hollybush Farm one night, the Lord seemed to say to me “I want that place for My Glory”, we immediately began to implore the Lord to tell us how that could come to pass – and He showed us. Consequently at the public auction six days later we were able to purchase the property.

We moved into the house in September 1968 and continued the Friday night meetings. A prophetic word was given” I will bring people from the North, South, East and West to be ministered to and to minister” People began to come from all over the area who were hungry for more of the Lord, until we occupied the largest room in the house(a bedroom) and spilled onto the landing and down the stairs.

We then moved out of the house into the granary, up the stone steps above where the present office is now.

The documentary ‘Faith in Action’ was shot in 1974 in the Granary which was able to seat about 120 people. The place soon became too small as more folk desired to come and we applied for planning permission for a Church Hall, which meant converting an old barn – this was opened in April 1979 seating approximately 220 people. That soon became too small and we moved into another farm building (where the missionary stands are situated now) and the fire regulation people forbade us to meet in the steel and asbestos roofed building. To fulfil their regulations would have cost us about £20,000 so we said "Please give us planning permission for a purpose built building and for the present time we will return to the small Church Hall." That was granted and the building you are now in was commenced in February 1988 and was opened, completed, in May 1992 – everything paid for, Hallelujah.

So this building replaces the big tent and although it doesn’t have the atmosphere of a big tent, it is certainly easier on those who have to man the electrics, audio and video and also not as much dust!!- or moles pushing up from the ground.

What's been happening lately?
Get the latest newsletter here